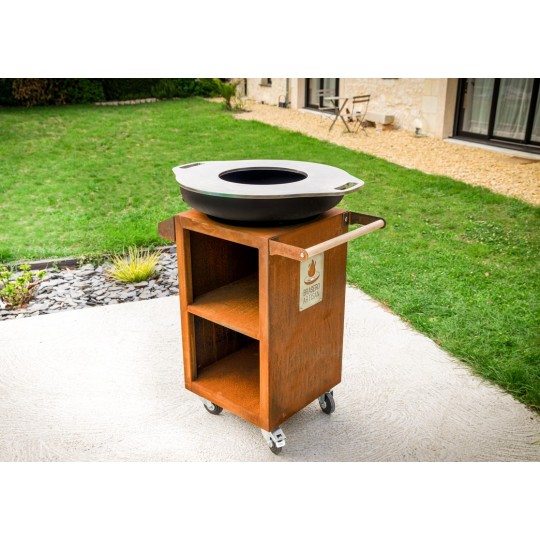 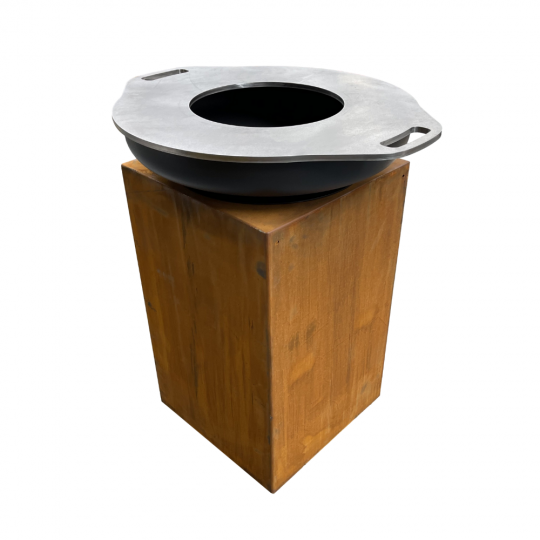 C65
€1,332.50
The "Huguette p'tite" brasero is the bud of the buddies, a barbecue braid to ripailler around a warm element in all seasons.Prepare your meats, fish, crustaceans and vegetables for 10 to 12 friends. 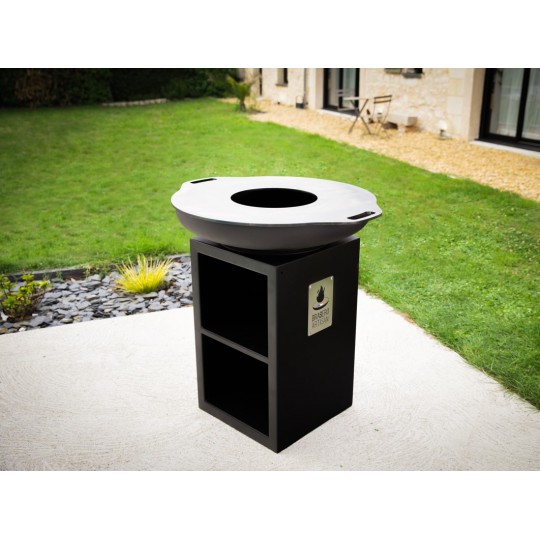 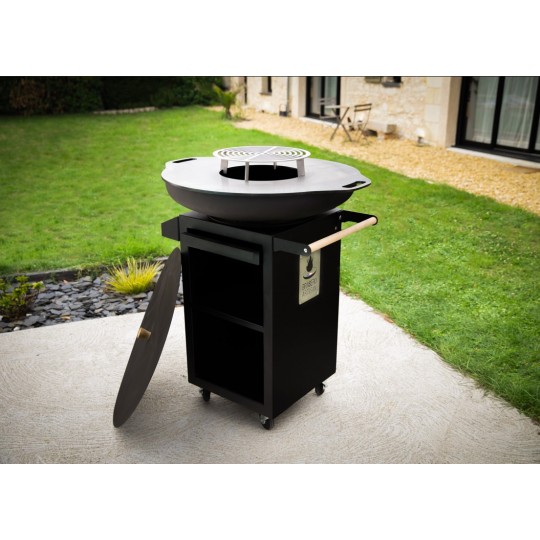 Round black brasero of Ø 800 mm on furniture (Le Dudule)

N80
€1,666.67
The Dudule brasero is the brasero of singing friends at the end of the evening, a barbecue brasero to enjoy around a warm element in all seasons. Prepare your meat, fish, shellfish and vegetables for 15 to 20 friends. Optional accessories: Cooking grid, casters... 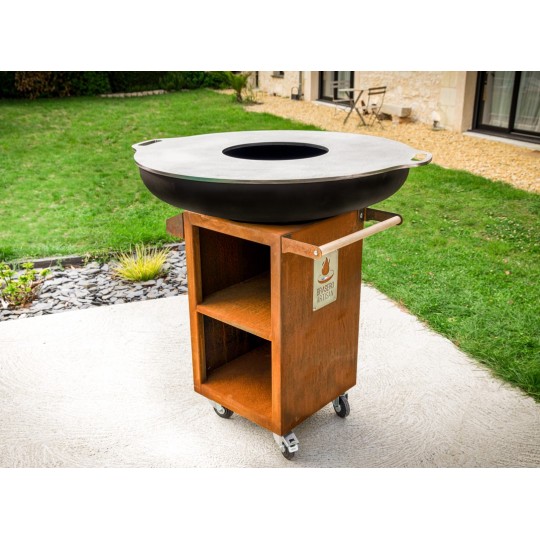 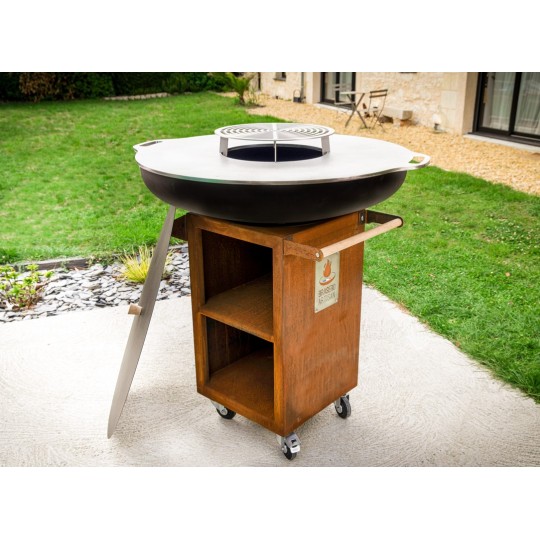 Round corten brasero of Ø 1000 mm on furniture (Le Gerard)

C100
€1,908.33
The brasero "Le Gérard" is the brasero of the buddies, a barbecue braero to ripailler around a warm element in all seasons.Prepare your meats, fish, crustaceans and vegetables for 60 to 70 friends. 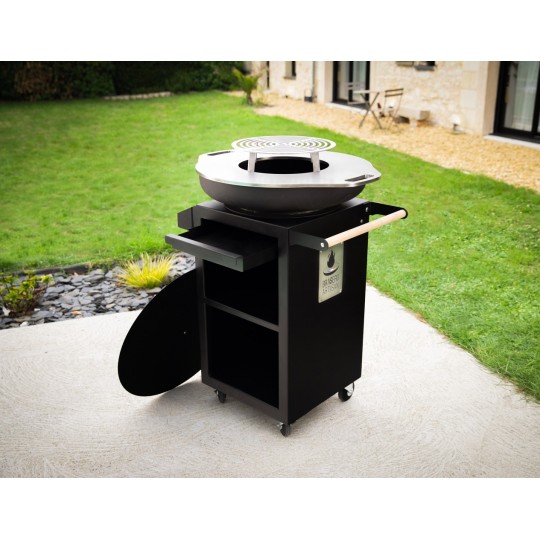 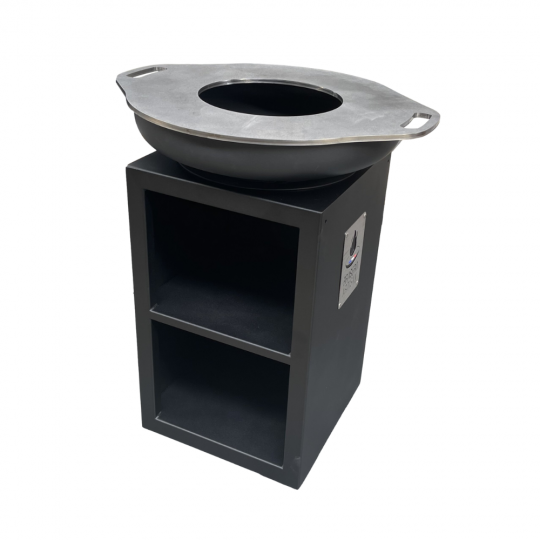 N65
€1,432.50
The brasero "la p'tite huguette" is the friendly brasero, a barbecue to enjoy around a warm element in all seasons. Prepare your meat, fish, shellfish and vegetables for 10 to 12 friends. 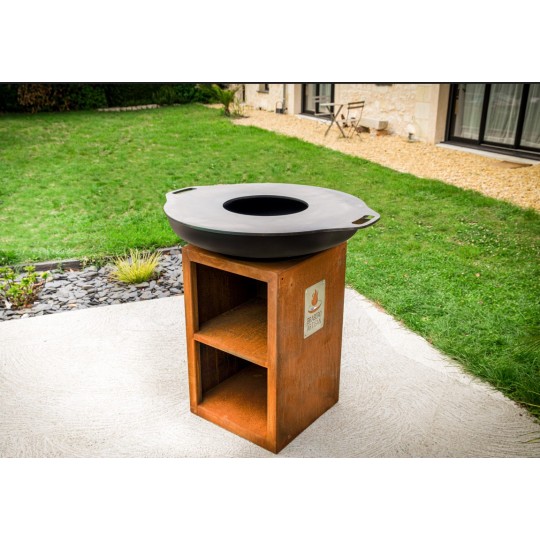 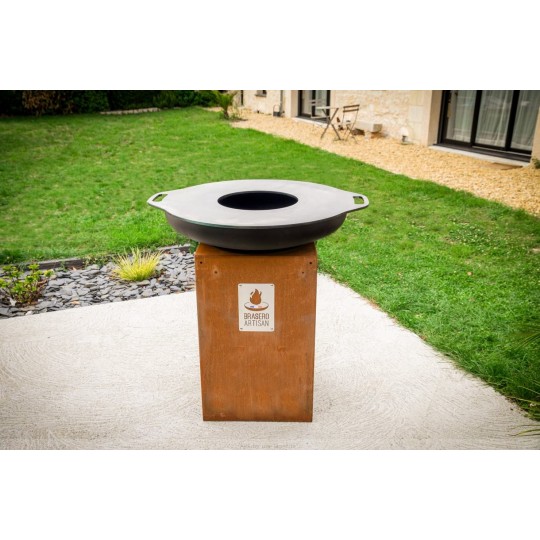 Round corten brasero of Ø 800 mm on furniture (Le Dudule)

C80
€1,500.00
The Dudule brasero is the brasero of singing friends at the end of the evening, a barbecue brasero to enjoy around a warm element in all seasons. Prepare your meat, fish, shellfish and vegetables for 15 to 20 friends. Optional accessories: Cooking grid, casters... 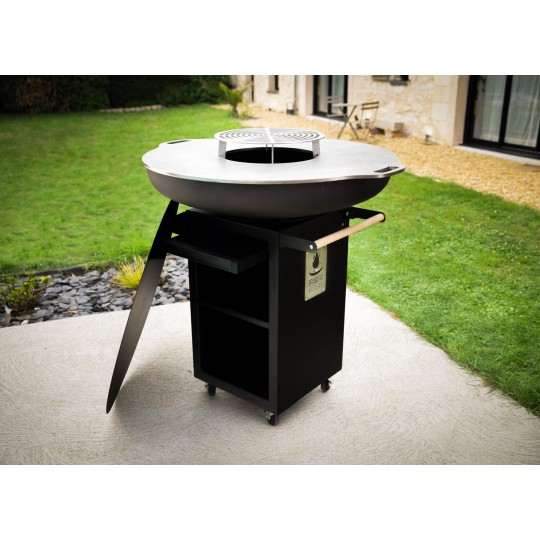 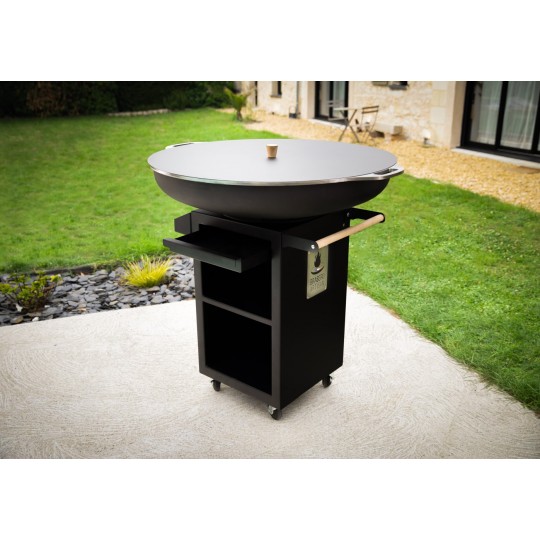 Round black brasero of Ø 1000 mm on furniture (Le Gerard)

N100
€2,075.00
The brasero "Le Gérard" is the brasero of the buddies, a barbecue braero to ripailler around a warm element in all seasons.Prepare your meats, fish, crustaceans and vegetables for 60 to 70 friends. 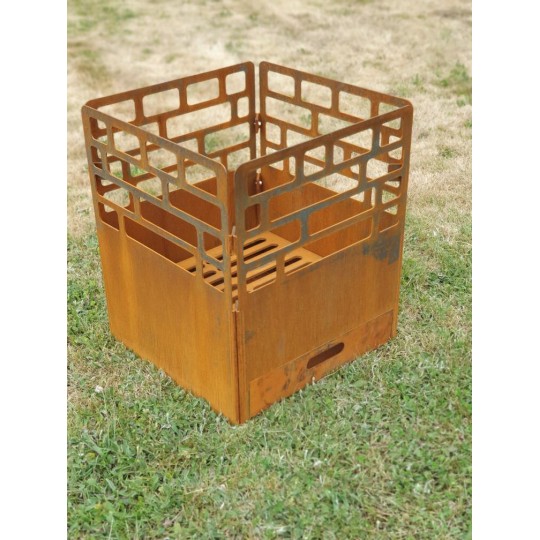 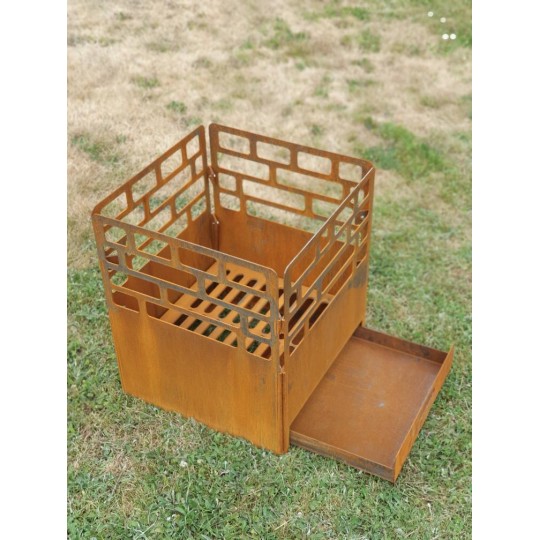 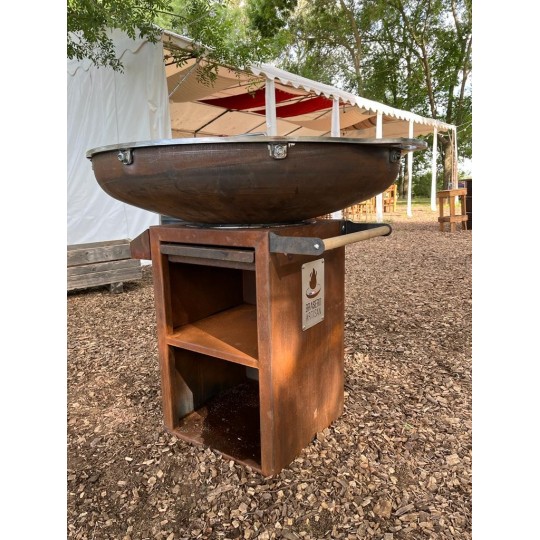 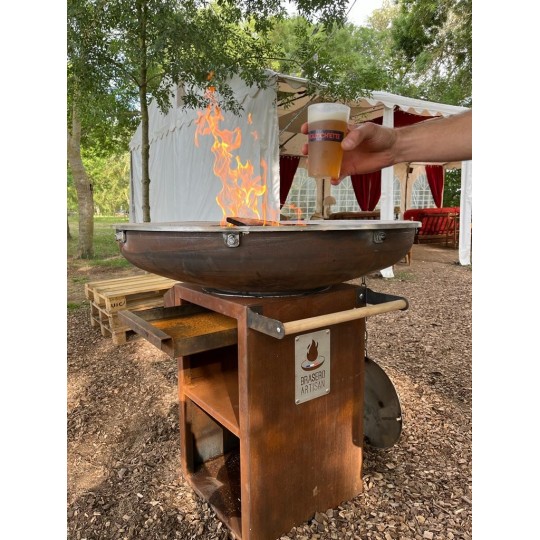 Round corten brasero of Ø 1000 mm on furniture (Le Gerard)

IC100
€5,000.00
The brasero "L'Indéboulonnable Gérard" is the braero of friends, a barbecue braero to ripailler around a warm element in all seasons.Its particularity is simple! No way to move it because it is equipped with a large steel plate that is fixed under the furniture.Prepare your meats, fish, crustaceans and vegetables for 60 to 70 friends.
View

Want to build your garden, bring an aesthetic touch to your terrace or spend a convivial moment between close to the outside under a starry sky? Your solution would be to opt for a brasero. Multifunctional and versatile equipment, it will accompany you in all situations. In addition, with a plancha brasero, you can leave your cook talents free to wreck your guests.

Brasero: What is it?

Originally, the brasero was a heating device. We used to put hot embers to warm up. For a long time, it has always been made of terracotta, then copper. With the evolution of technology, it is currently found in cast iron or metal. The design of the brasero was reinvented. By passing through the traditional Mexican chimney and the dome, we find it today, with various aspects with particular aesthetics, sometimes out of the ordinary. The brasero has adapted to the expectations of aficionados. Used previously as a heating equipment, it now allows the creation and sharing of unique moments around a wood fire in the garden, like a campfire. Who does not appreciate the small meetings around the fire after dinner with discussions not to end until the early morning? The brasero also forged a notable reputation as a cooking unit. In its plancha and barbecue version, the grilled recipes are highlighted. In addition to this, we love its decorative side. He can develop in his environment, whether on the lawn, on the terrace, or on the pool.

What is the difference between a barbecue and a brasero?

When the summer reaches the tip of its nose, you immediately think about the outdoor meal. Ever since then, the barbecue has been the favorite equipment of barbecue enthusiasts. Today, the brasero is gaining more and more places with amateurs. Unlike the barbecue which is an open device, the brasero is a semi-open cooking equipment. The first, it, allows only one mode of cooking, while with the second, many possibilities are available to you regarding your culinary preparations. You can give yourself to grilling, smoking, or cooking with suffocation. You will take pleasure in varying your recipes based on meat, fish or vegetables with a particularly authentic taste. On some variants of braseros, like Mexican, you can even make pizzas. This versatility does not stop there. During late evenings with your loved ones, the brasero can become a heating device. It is also its main function. After the grilling of your skewers, add warming wood so that it operates as such in order to prolong your festivities without fearing the drops of temperatures outside.

What is the interest of a brasero plancha?

To be short, the plancha brasero is a cooking device 3 in 1. It is obviously composed of a plancha, a cooking grill and a wood fire. It is quite similar to the barbecue which is a kitchen appliance. However, the models with removable cooking plates allow to combine the pleasures of the table and fire. By removing the accessories, they easily turn into a heating system with an open fireplace. The brasero plancha is today, one of the unmistakable equipment in the summer. Why? First, because it allows the preparation of various kinds of dishes while occupying its external heating function. It also offers a wide variety of cooking modes: grilled, suffocated, stirred, heated or simmered, etc. It is an alternative to barbecue, but we remain formal about its multifunctionality, aesthetics and ease of maintenance. The breeze plancha has a cooking area and a grill ensuring a unique and traditional cooking mode. Like the plancha, the device allows healthy cooking. Foods keep their natural flavour while avoiding the smell of smoke. Generally, preparations are placed around the brasero so that each person can find the cooking adapted to his tastes.

What material for a brasero?

Depending on the brasero you are looking for, you will inevitably fall on these materials: The cast This is the most popular material in terms of braseros. It is appreciated for its large thermal capacity. It stores the heat well, restores it with brio and is capable of resisting the very high temperatures. It also presents a good value for money. With its sleek shape, it easily accommodates all outdoor styles. It is however sensitive to blows and remains rather heavy to carry. Terracotta It is a natural material used for a long time by designers. It is especially preferred for its authentic design, but has many qualities as kitchen equipment. However, it is more fragile than other elements. Steel By its more malleable structure than cast iron, it allows the manufacture of braseros with the most original aesthetics. Light, heat-resistant, shock-resistant and corrosion-resistant, it is also more affordable in terms of price. Corten steel More resistant than steel in the face of external aggressions, it has a rusty patina naturally allowing an elongation of its lifetime. Robust while presenting a most appreciated style, it is relatively easy to maintain.

How do I choose his braero barbecue?

To choose your braero barbecue, here are the features on which you need to focus: The type and design Before you go further in your quest, you have to take a look at the type of brasero you want to install outside. In general, you will deal with various versions such as: The classic brasero: often in the form of cut or basket, it can be mounted on foot, on another support or placed on the floor. The brasero plancha: it allows the cooking of a multitude of recipes thanks to its plate and grill. The Mexican chimney: resuming the shape of a large jar, it includes two levels whose inferior is used for the braises and the upper part allows the cooking of food like an oven. The exterior chimney: it is similar to the Mexican chimney with a steel structure (enamelled, lacquered or stainless steel). The size It is chosen according to your needs, the space you have for the installation of your equipment, but also, depending on the number of guests you plan to regularly invite around your brasero. Manufacturing material The models you encounter in the trade are made of cast iron, steel, terracotta. Each element has their advantage as their limit to use. However, prefer a brasero that will accompany you in the duration and resist intensive handling while being easy to maintain.

Home Brasero Artisan, you have the choice between simple braseros and planchas braseros. The models take back the authentic design of the cutting-edge devices. On a base or mounted on a storage cabinet, they are available in different sizes to suit the expectations of individuals and professionals. Home equipment Brasero Artisan are operational as a heating system during your night festivities. BBQ braids can support you during outdoor meals. All versions advance both authentic and elegant design, but also robust with their corten steel structure, displaying the brand's know-how in the field as a 100% made in France certification.